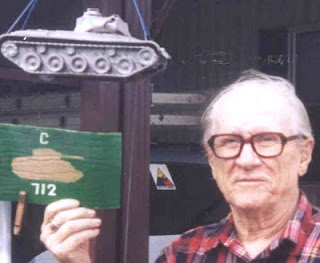 Harlo J. "Jack" Shepard was one of the veterans I interviewed back in 1993, when I was writing "Tanks for the Memories." Trouble is, the interview filled six 90-minute cassettes over two days, and when I got around to transcribing it, I stopped after the second tape. That was 17 years ago. Jack and his wife, Betty, are both since deceased, and until a few days ago, I still hadn't listened to the third cassette.

I'm one of these people for whom stories go in one ear and out the other, so that when I listen to a tape -- especially after nearly two decades! -- it's like hearing the stories for the first time. Jack has already cleared up one mystery for me that I thought I'd never solve. It may not rank with what happened to Raoul Wallenberg, but to me it was a question I never thought would be answered: Why did Colonel Whitside Miller make his executive officer, Baxter Davis, doubletime in front of the whole battalion?

It was an episode that contributed greatly to Colonel Whitside, as he was known, being relieved of his command, and was described to me by several officers in the battalion. But none of them could remember just what it was Major Davis did that got him reprimanded in such a matter.

And then, there it was, right on tape 3 of my interview with Jack Sheppard.

Here are two sound clips -- this is, after all, an audo blog -- from my interview with Captain Jack. Although he went on to serve in the Korean War and retired as a colonel, he was a captain and company commander with the 712th Tank Battalion. In the first clip, he describes the incident with Whitside Miller. In the second, he talks about the Silver Star he was awarded with the battalion. The faint background music is provided by Jack's wife, Betty, who was listening to music in the next room during the interview.