The Mark of a True Soldier (Pfaffenheck, Part 3) 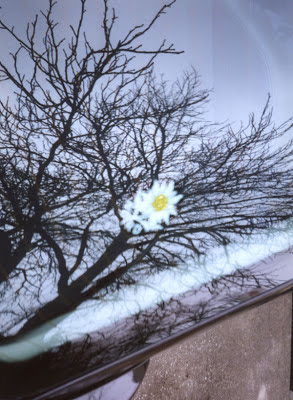 (Pfaffenheck, Part 1)
(Pfaffenheck, Part 2)
I've only watched the first two episodes of "Band of Brothers," and that was several years ago, but when I did, one scene jumped out at me. And wouldn't you know, the scene is on YouTube, so that I was able to refresh my memory this morning. It's the scene in which the paratroopers find a dead German soldier wearing an edelweiss, the "mountain flower," which one of them remarks is the mark of a true soldier.
The first time I saw the scene, I was like, "What's an edelweiss doing here?" When I traveled to the village of Pfaffenheck in 1995, I learned that the edelweiss was the symbol of the 6th SS Mountain Division North, whose soldiers were ski troops and spent a good part of the war in Finland. The "mountain flower" only grows above 10,000 feet, and I think one of the soldiers in "Band of Brothers" remarks that it was the mark of a true soldier because that soldier had to climb a mountain to pick one.
The last few months my book "A Mile in Their Shoes" has been above the tree line in the Amazon Kindle rankings in three different categories -- Armored Vehicles, Naval, and Veterans -- and one of the books that has been up there for eons is titled "The Lions of Carentan." It's about the 6th SS Falschirmjager Division, which was in Normandy. The dead German soldier in the "Band of Brothers scene" was from the 6th Falschirmjagers. I don't know if they had an edelweiss for their symbol or if that was a Spielbergian touch, but for me it was an aha! moment, as is just about any moment when I recognize a personal connection to a scene in a documentary, movie or book.
I'm not much of a photographer, but I've always been captivated by the photo I took at the beginning of this entry of an edelweiss -- not a real one -- on the inside window of the BMW of the German veteran who acted as one of my two interpreters. I can't name him because he wrote a book in English titled "Black Edelweiss" under the pseudonym Jochen Voss.
Voss did not take part in the battle at Pfaffenheck. After the fidgety-nerved tank gunner fired those five shots into his machine gun position, he was taken prisoner a week before Pfaffenheck at Wingen as the 6th SS Gebirgsjagers -- a gebirg is a mountain, whereas a fallschirm falls out of the sky, or something like that -- worked their way north from the Vosges. Nor was the other interpreter, Wolf Zoepf, who also wrote a book, titled "Seven Days in January," as he was captured during Operation Northwind. Zoepf passed away the week his book came out.
A number of interesting things occurred when I went to Pfaffenheck the following year for the Germans' reunion and ceremony.
On the second day, Voss said to me that after a discussion among the association's leadership, they decided it would be okay to ask me about something. One of the villagers in Pfaffenheck some time ago had told the German veterans about an incident in which the tankers in Pfaffenheck made a badly wounded German march in front of a tank as they approached the village. Voss wanted to know if I had ever heard of such an incident. I told him I would look into it.
I only had to look as far as my 1992 interview with Bob Rossi, the loader in Otha Martin's tank, commanded by Jack Green, in which he described the battle without knowing the name of the town.

"About that time, we're coming down the road, and there's a German soldier laying on the side of the road, he's about cut in half on a stretcher. And I remember, Loop's tank was in front of us, we were coming behind him, and the German was like waving from the stretcher for us not to run over him. I don't think we would have anyway, I don't think I would, I know we wouldn't. So we went into the town, and there was a house, and they made a red cross on a sheet with blood, the Germans, in blood they made a red cross hanging out there, and there were German wounded and German prisoners lined up along a little brick wall there in front of the house.
"So with that, Loop went back to bring this guy in, the wounded German, and he makes the guy walk in all the way. The guy is just walking hunched over, just holding his gut, he's in bad shape. And he gets to that wall, and he's leaning on the wall. In the meantime, one of our medics motions to two German soldier prisoners to help with the wounded. [Jack] Green thinks that these two guys are trying to take off, and he grabs the one Kraut and he hit him on the head, he kept banging him on the head with a tommy gun clip, he split his head open, and I'm going "Hey Green, for Chrissakes, stop, Green!" He was a mean sonofabitch."

There are enough elements in this description to indicate it took place after but not in Pfaffenheck. Lieutenant Fuller's platoon approached the village through an orchard and didn't take the road. (It may have been the day before, as they approached Udenhausen.) All of the participants are deceased, so I can no longer investigate further. But considering the character of some members of the platoon, such as Jack Green, and even the feelings at the time of soldiers I only encountered as gentle elderly men, I would say it was possible such an incident occurred. I never did tell Voss of my suspicions.
A somewhat more humorous event occurred during the German veterans' banquet on the last night of the reunion. The first year I went, the banquet was a luncheon in the early afternoon and was in some kind of municipal hall. The second year it was in the evening, it was 1996, the beer was flowing pretty freely, and following the dinner the room burst into several marching songs. It was quite entertaining. And then one veteran came to the table where I was sitting with Voss and a couple of other veterans, and he was very animated, he wanted to tell me something, only he didn't speak English, so he just poured it out in German, and I could tell Voss was just the least little bit uncomfortable at what he was hearing. He did, however, give me a synopsis of what was said.
This veteran had just joined the division as a replacement, I guess he was about 18 years old, and Pfaffenheck was his first battle. He was in a house at the end of the village, one of three I think that were occupied by the Germans, and when he saw the tanks approaching and firing their big guns, he crapped in his pants.
Even after all these years, there was something unspoken in Voss' reaction to this story that seemed to project disdain.
I haven't spoken with Jochen since, but my two German Facebook friends -- Holger and Thorsten -- who I supplied with copies of my German interviews, told me he's still living and they've now been in touch with him. So bear with me, I'm sure you haven't heard the last of Pfaffenheck, which also is described in my new book, "The Armored Fist," due to be released on April 16.
Please subscribe to the Oral History Audiobooks email newsletter to keep up with the latest developments and specials.
Web Form Generator