The Middle of Hell 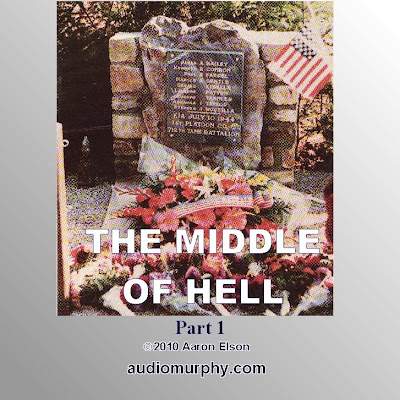 A word about nicknames. Some of the nicknames given in World War II were anything but politically correct. The 712th Tank Battalion had a cook named Harry Speier. Speier was a German Jew who came to America in the 1930s. When I heard one veteran say that the men called him Gestapo, I edited it from the tape, but later Michael Vona, a veteran of Company C and a survivor of the battle on Hill 122, called him "Gesund." When Koon Leong Moy, from New York's Chinatown, joined the battalion as a replacement, a sergeant gave him the nickname "Chop Chop" and tried to have Moy transferred to his crew "so he could cook for him," according to Bob Rossi.

The battalion had several Native Americans, more than one of whom was nicknamed "Chief," and one of the only two surviving crew members of a tank that was knocked out in the Battle of the Bulge was nicknamed Frenchy, only I'm not sure which -- Roy R. La Pish or Hilton Chiasson, of Thibodaux, Louisiana.

Edward Dzienis, the loader in Lieutenant Jim Flowers' tank, was nicknamed "Mother" because he never drank when he accompanied his friends to Columbus, Georgia, or Phenix City, Alabama, and while his buddies were trying to get drunk or pick up girls, he would shop for sheets or pillowcases and other items to send home to his sisters. And Wes Harrell, an assistant driver in the first platoon of Company C and later a driver, was a little "broad in the beam," which led his gunner, Donald Knapp, to tell him he had a "butt like a Wac," and thus he was christened "Corporal Wac."

When Michael Vona, the assistant driver in Sergeant Kenneth Titman's tank, referred to his tank commander as "Titless Tittie from Salt Lake City," I was sure he was kidding. But Clarence Morrison, the tank's driver, also mentioned that the crew called Titman "Tittie." Behind his back, I hope.

Lieutenant Francis A. Fuller, who took over the second platoon shortly before the Battle of the Bulge, was in his mid to late twenties and might have been older than the men in his platoon, but I'm sure it was an exaggeration when an enlisted man named Wes Haines, who had "done imbibed him some," according to Otha Martin, a tank commander in the platoon, said Fuller "looked like Snuffy Smith in the comics." Henceforth he was was known as Snuffy Fuller.

These were the men of the 712th Tank Battalion, some of whom you'll meet in "The Middle of Hell," my most ambitious oral history audiobook yet. It tells the story, in the voices of the veterans involved in the battle, of the events on Hill 122 in Normandy that led to the destruction of the first platoon, Company C.

The 712th landed in Normandy on June 28, three weeks after D-Day, and entered combat on July 3. The battalion suffered heavy losses during its first week of combat but the first platoon of Company C, led by Lieutenant Jim Flowers, was relatively unscathed despite several close scrapes that left some members of the platoon on edge.

On July 11, 1944, the platoon, with five tanks still at full strength, was called on to go to the aid of a battalion of the 90th Infantry Division on a plateau atop Hill 122. The battalion was surrounded by elite German paratroopers. One of the tanks experienced a transmission problem -- the tank hung in reverse -- and was unable to accompany the others to the staging area.

The four tanks broke through the German lines and reached the infantry. Flowers and the infantry commander, Colonel Jacob Bealke of Sullivan, Missouri, decided the tanks would lead one company down off the hill, and the rest of the battalion would follow.

Despite an intense firefight, the tanks made it to the base of the hill, but the infantry company took 80 percent casualties. Its survivors dug in at a road at the bottom of the hill, and the tanks kept going forward, over one hedgerow, across a field, and over another hedgerow. One tank bogged down in the first field.

Suddenly, well-concealed anti-tank guns opened up on the three tanks in the second field and all three burst into flames.

"I like to dramatize this a little bit," Jim Flowers would say 49 years later, when I interviewed him in Bradenton, Florida, "by saying I'm now standing in the middle of Hell, with all this fire shooting up around me."

These are the veterans you'll meet in "The Middle of Hell."

Jim Flowers.  My full-length, three-CD interview with Jim Flowers is included in my first oral history audiobook, "The Tanker Tapes." I've excerpted a half-hour of that interview along with a brief interview with Claude Lovett, the infantry lieutenant who rescued Flowers after he lay in no man's land for two nights and three days.

Jim Rothschadl, Flowers' gunner, lay out in the field with Flowers, both badly burned.

Jack Sheppard was the company motor officer when, on the first day in combat, his company commander was injured by a booby trap. Sheppard became company commander and saw his first, and very nearly his last, combat in a tank when he took part in the assault on Hill 122, and a shell struck the turret of his tank about a foot from his head.

Louis Gerrard was the gunner in the tank commanded by Sheppard that fateful day. Gerrard lost an eye in the battle and played dead while German soldiers removed his watch and tried to take a ring off his finger, then propped him up against a hedgerow so his body could be found.

Earl Holman was the loader in Sheppard's tank. When the crew abandoned tank he, too, played dead while the Germans searched him for cigarettes.

Kenneth Titman was the tank commander of one of the three tanks that burst into flames. His gunner and loader both died in the tank and Titman was wounded in the leg and captured.

Michael Vona, the assistant driver of Titman's tank, was stunned by the explosion of a hand grenade and set upon by a German soldier who vaulted over the hedgerow. As they grappled the German put a luger to Vona's head and pulled the trigger. It clicked, but the gun was empty. The German was then shot, and Vona pulled him, still alive but moaning and in shock, on top of him to protect him from other Germans who were roaming the battlefield.

Clarence Morrison, the driver, also escaped Titman's tank but was wounded and dazed. He and Vona shared a German foxhole until it was dark, and then they managed to escape.

Jake Driskill, the company motor sergeant, repaired the transmission on Sergeant William Montoya's tank, and was among the men who inspected the damage after the battle was over.

Donald Knapp was the gunner in Montoya's tank, and later became a tank commander when the company was reorganized.

Myron Kiballa had just gotten out of the hospital after being wounded in Anzio when he learned that his brother Gerald, the assistant driver in Flowers' tank, had been killed.

Cliff Flora, one of Sergeant Driskill's mechanics in Company C, was at mail call after the battle when a box addressed to Harold Gentle, the loader in Sergeant Abe Taylor's tank, arrived from Gentle's mother. Taylor's entire crew was killed. Among other things, the box contained cookies. After a brief discussion, the members of C Company passed the cookies around, but it always bothered Flora that there they were eating the cookies from Gentle's mother and she didn't even know yet that he'd been killed.

Any one of these interviews gives a picture of what it was like in World War II. Together they paint a unique verbal portrait of the far-reaching and long-lasting effects of a battle.

The entire set is 17 CDs, or about 17 hours, long. Here are some excerpts:

Read more about the battle in the online version of "They Were All Young Kids"
Posted by Aaron Elson at 5:52 AM No comments: