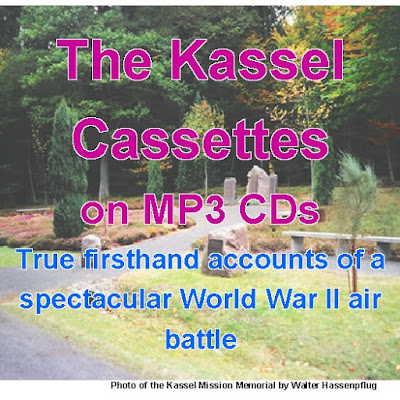 The Kassel Cassettes
an audiobook on MP3 CDs

On Sept. 27, 1944, thirty-five B-24 bombers flew off course and were ambushed by more than 100 German fighter planes.
The bombers had lost their fighter protection, and were easy targets for the swarming Fokke-Wulf 190s and Messerschmitt 109s.

Not that they were defenseless. Each B-24 Liberator was heavily armed with several .50-caliber machine guns that were blazing away during the battle.
According to most accounts, the battle lasted less than six minutes, by which time the criews of "Mayday!" over the radio drew the cavalry in the form of the P-51s of the 361st Fighter Group.
By the time it was over, 25 planes of the 445th Bomb Group were shot down. Many of the German fighter planes were shot down as well, and one American fighter pilot was killed.

Of the ten remaining Liberators, three crash-landed in Allied-occupied Europe, two reached an emergency landing base in England, one overflew the group's base at Tibenham, and only four made it back to base.
I began interviewing survivors of the battle in 1999 after I visited a monument in Germany that has the names of every American and every German killed in the battle. The nonument, built by the Kassel Mission Memorial Association -- later called the Kassel Mission Historical Society -- with the help and inspiration of German historian Walter Hassenpflug, is a powerful testament to closure between former enemies.

"The Kassel Cassettes" on MP3 CDs is available in my eBay store for $14.95. It includes more than 22 hours of interviews with pilots, tail gunners, bombardiers, navigators, prisoners of war, and a widow and two sisters of fliers killed in the battle.
These are MP3 CDs and will not play on most CD players or in older vehicles. Many newer cars have CD players that accommodate MP3s, and they will also play on virtually all computers and tablets and in CD and DVD players that specifically say they play MP3s.
The set is also available as regular discs, but due to the fact that each regular CD holds at most 70 minutes of material, the entire set fills 21 CDs and is more expensive.
Following is a sampling of tracks from the set which will provide an overview of the battle. 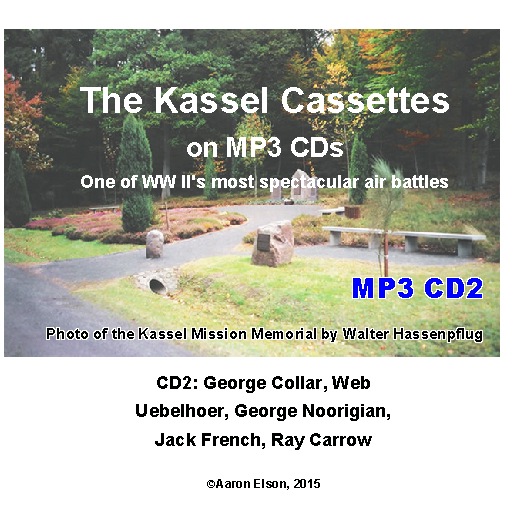 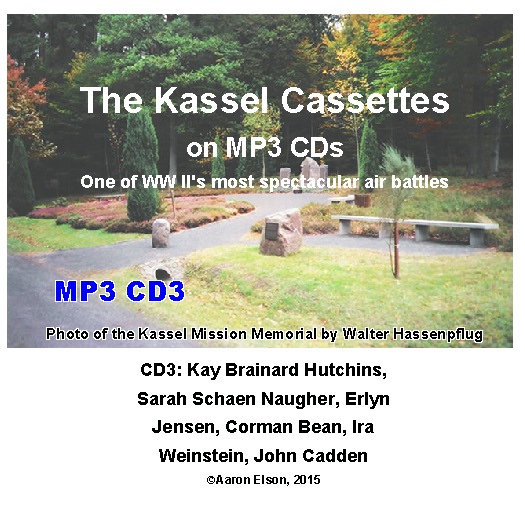 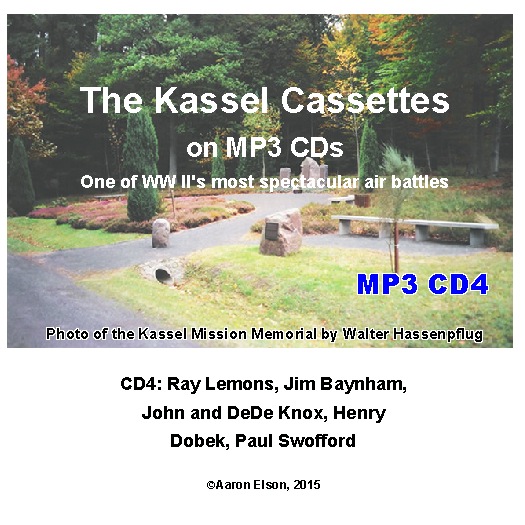 Posted by Aaron Elson at 3:59 PM No comments: