.   My supervisor was right. These were veterans of the Waffen SS, but to me they were humans. It was a strange feeling during the ceremony as I watched one of their veterans place a wreath in the cemetery at a monument dedicated to the anti-tank platoon, knowing that its weapons had knocked out three of Lieutenant Fuller's five tanks, killed four members of his platoon and wounded several others. And it was an even eerier feeling meeting the veteran who fired the antitank gun that struck Sergeant Hayward's tank, cutting off his legs -- he was later killed either by a sniper or machine gun fire as Fuller and his gunner, Russell Loop, tried to carry him between them to safety -- and either killing Billy Wolfe instantly or burning him to death inside the tank. It was a very strange feeling indeed, to learn at the banquet -- where my hosts set up a table for me to interview some of the veterans, with two of them acting as interpreters -- that the fellow who fired the antitank gun was in turn wounded -- likely by Sergeant Loop, who claimed to have gone up to the second story of a house, taken a rifle and picked off the members of the gun crew that disabled his tank -- and allowed to return to his family after getting back across the Rhine, and then, either weeks or months later, turned himself in so as to become a prisoner of war because he was unable to find work. 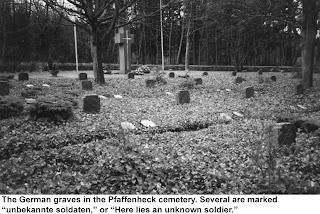 When they held the ceremony in 1995, the Germans were expecting protests because anything to do with the Waffen SS was frowned upon in Germany. There was a significant police presence, but perhaps because it rained that day no protesters showed up.
I returned from that reunion with about six hours of interviews in German with only the brief synopses by my two interpreters. I learned that the 1995 ceremony was unique only in that it marked the 50th anniversary of the battle, but that the veterans of the 6th SS Mountain Division North gathered in Pfaffenheck every year on the anniversary of the battle because 100 members of their division are buried in the village cemetery, and more are buried in the nearby town of Buchholz where there was another pitched battle, but one that to the best of my knowledge did not involve my father's tank battalion. When I went with the German veterans to the ceremony in Buchholz, they showed me an antiaircraft gun preserved in the village, that had been used against the ground forces. One of the men killed in Pfaffenheck, Sergeant Russell Harris, was struck in the head by a shell from a 40-millimeter antiaircraft gun.
One thing I will say is that while I found the German veterans to be very human -- I remember overhearing something about Gehringer's wife suffering from depression, and Gehringer himself, who was the burgomeister of a medieval town called Rothenburg on the Tauber, would die the following year -- I can't say as much for some of the younger people who attended the ceremony/reunion. There was a young museum director I think from Koblenz who brought with him a rusty old pistol that had been found in the forest, and he was trying to confirm that it had belonged to Gunther Degen, and I very much sensed that he was more upset than most of the veterans that the Germans lost the war. And there were a couple of young what seemed to be neo-Nazis from Switzerland. I also sensed that my hosts were at least a little bit uncomfortable with what to some is the cult status of the Waffen SS.
Those tapes -- and another three hours worth from 1996, when I returned to Pfaffenheck for their reunion, but more about that anon -- languished on a shelf until last year, when I heard from two men in Germany who belong to some sort of archeology club and were researching the events at Pfaffenheck. I was able to put them in touch with one of my hosts -- the other has since passed away -- and I sent them copies on CD of the interviews, which they promised to translate, although I haven't yet received the translations.

(Next: The Mark of a True Soldier)
Please subscribe to the Oral History Audiobooks email newsletter to keep up with the latest developments and specials.