The Finger of Fate 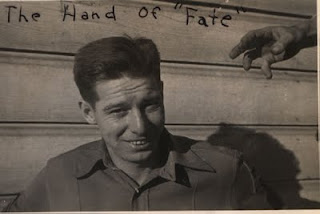 Yesterday I ran into Steve Krysko, one of the veterans I interviewed many years ago. Steve isn't the veteran in the picture; that's Hilding Freeberg, whose widow, Alyce, let me scan pictures from Hilding's photo album after he passed away.

It was kind of sad seeing Steve. He was outside in front of the high rise where he lives on the upper West Side of Manhattan, with a walker, getting a bit of exercise. I asked him how old he is now and he said 90. He said he has a lot of things wrong with him now and that he's nearing the end of his life. He seemed depressed, and complained that while the cost of everything is going up, his income hasn't gone up in five years. He has a pension and Social Security. He worked for American Express after the war until he retired. He said he didn't know what he would do without the excellent health coverage that he got when he retired; I assumed he meant some kind of retiree health coverage from American Express but I didn't ask him to elaborate. He did say he had skin cancer on his head and showed me a scar where it had been removed, and he said they gave him a salve to apply, I think he said the price was $900 for a three-month supply, which was covered. But that and some other medications he's taking, he could never afford otherwise.

He said he was in the hospital recently, and that his defibrillator -- he has one of those implanted -- was acting up. And he said there was a young man in the hospital, he couldn't have been more than 20 or 22, and he had no hands and no legs, and he said imagine having to spend your whole life having somebody dress you and wipe your rear end when you go to the bathroom. He didn't use the words "rear end."

Steve was a rough and tumble kid from Scranton who moved to New York City and then Bridgeport, Connecticut, before he was drafted. I said earlier that I interviewed him but I didn't really interview him; when I showed up to conduct the interview he said he thought about it and he didn't want to talk, but in place of the interview he had written an account of his experiences, and he handed me a manuscript that was 15 to 20 pages. Like a dummy I had my tape recorder with me but I didn't turn it on. And as I looked at the manuscript I would read a short passage from it and he would elaborate. I wish I'd gotten that elaboration on tape but I didn't.

After seeing him yesterday I re-read his story, which he titled "The Finger of Fate." Only half to two-thirds is up on the site, and the rest of the manuscript is, hopefully, in a filing cabinet or a box of papers in my apartment somewhere.

About ten years ago the producers of "The Color of War," a documentary that was on the History Channel, used some passages from my original web site, tankbooks.com, having actors read the passages to illustrate original footage from World War II. They needed pictures and consent forms, so I contacted Steve and he gave me the following pictures: 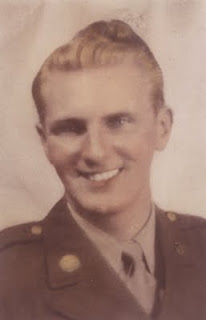 ﻿
Here's a link to Steve's story, "The Finger of Fate." The language is a little salty, but like I said, before World War II, Steve was a rough and tumble kid from Scranton, not the kindly old gentleman I used to see feeding the squirrels in the grassy areas outside the building where he was a neighbor of mine.
Posted by Aaron Elson at 8:38 PM No comments: