Fifty-eight thousand young Americans were killed in Vietnam, and more than 400,000 died in World War II. Add the number of Russians, Germans, other nationalities, civilians, and the figures boggle the mind. Every one of those 400,000 and all those others had a mother, a father, many had brothers, sisters, some had children. My sister Arleen had a friend from childhood whose father, several years ago, was in his nineties. "You should talk to him," my sister said. So I paid him a visit and asked about his brother. He declined to talk about him. All these years later the pain was still intense.
Tom Stumpner of Eagle Lake, Wisconsin, had an uncle who was killed in the war. He only knew him as "Uncle Bud." His mother would never talk about her brother. When she was near the end of her life, she gave Tom a chest with all of "Uncle Bud's" memorabilia: snapshots, letters, papers. Only then did Tom learn his uncle's real name, John Daum. Tom sent copies of the letters and photos to the web site of the 508th Parachute Infantry Regiment, John's outfit, which posted them online as a way of keeping John's memory alive. 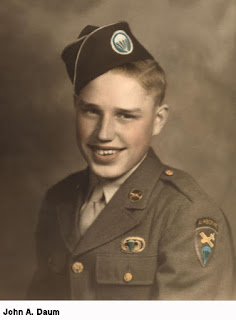 Over the years, I've interviewed a number of women who lost their husband in World War II, as well as brothers and sisters who lost a sibling. I've taken eight of those conversations and turned them into my newest audiobook, "Widows and Siblings."
To say there is anything universal in eight conversations out of hundreds of thousands that could have been conducted would be a mistake. Even the eight differ greatly in their circumstances and the types of stories that are told. Although it would be safe to say that each of the deaths in combat deeply affected many people. That goes for victims of gun violence today, all you have to do is read news accounts.
And while there are moments of deep poignancy in the conversations, there are also moments of great humor. Like the time Erlyn Jensen was talking about a trip her mother took to see her son's grave in the cemetery at St. Avold, France. I got all choked up at one point in the story and Erlyn said, "If you're gonna cry now, just you wait!" I've always been touched by the humor in that warning.
Erlyn and Sarah Schaen Naugher, whose husband was killed in the same air battle as Erlyn's brother, were being stand-offish to each other at the 2008 reunion of the Kassel Mission Memorial Association. Sarah felt it was worse to lose a husband in the war than it was to lose a brother, but try telling that to someone who was 14 years old and whose big brother was her hero when he was killed. The two women have since made up and are great friends.
These are the people you'll meet in "Widows and Siblings":


James Bynum: James' older brother, Quentin "Pine Valley" Bynum, was the tank driver who gave my father a lift to the front in Normandy, and who later was killed during the Battle of the Bulge,


Elizabeth Pitner: Elizabeth and Wally Lippincott were married for only eight months, five of which he was overseas before he was killed at Bras, Luxembourg, on 14 January 1945. Mrs. Pitner remarried, but she never got over Wally and said she believed he would have wanted her to remarry.
Elmer Forrest: The only name I remembered from my father's stories was that of Ed Forrest, a fellow lieutenant who was killed. Ed was from Stockbridge, Mass., so one day in 1994 I called information and asked if there were any Forrests in Stockbridge. I got the phone numbers of three Forrests in Lee, a neighboring town. Elmer was the first one I called. I asked if he was related to an Ed Forrest who was killed in World War II. After a moment's silence, he said, "He was my brother."
Myron Kiballa: Myron had just gotten out of the hospital after being wounded in Italy when he learned in a letter from his family that his brother Jerry had been killed in Normandy. "It was like I was in the twilight zone," he recalled. "That was the worst letter I ever got."


Erlyn Jensen: Erlyn's brother Bill, who was known to the 445th Bomb Group as Major Don McCoy, was the command pilot on the Kassel Mission when his plane was shot down.


Kay Brainard Hutchins: Kay had one brother who was a prisoner of war and another who was missing in action, so she joined the Red Cross and went overseas as an air club hostess. Her brother Bill survived the war but Newell Brainard, a co-pilot on the ill-fated Kassel Mission, did not.
Some of these interviews are included in other sets, but this is the first time they've been together in one group, and several of the CDs are not in other sets.


Check out my eBay listing for "Widows and Siblings"

The telegram scene from "We Were Soldiers":

Posted by Aaron Elson at 8:42 PM No comments: