My fellow Stuyvesant High School alum Mitch Corrado asked if he could post a brief excerpt from "The Armored Fist" on his Facebook status. I told him I'd be honored.
The selection he chose was about the reaction of Quentin "Pine Valley" Bynum's father to his son's death in combat.
This got me to thinking about Quentin Bynum with Memorial Day only a couple of days away, not that I don't think about him often. At the very first reunion of the 712th Tank Battalion I went to, in 1987, I met Jule Braatz, the sergeant to whom my father, a replacement lieutenant, reported, and Braatz told me a story about Bynum giving my dad a lift to the front in the "bog," or bow gunner's seat, of his tank.
The story was third hand, Braatz said, because Bynum was later killed. So Bynum had told Braatz and Braatz was relating the story to me. That seems like it would be secondhand, whereas me relating the story now would be third hand.
Upon arriving at the front, late in July of 1944, Bynum's platoon came to a halt and my father, to the best of my knowledge, wanted to get out of the tank to look for the platoon to which he was assigned, which Braatz, the platoon sergeant, had led into the battle.
Bynum told Braatz he urged my dad not to get out of the tank because there was still artillery or mortar shells coming in, but my father insisted on getting out of the tank and was wounded almost right away. He never did find the platoon, and Braatz would later receive a battlefield commission. My father would not return until November.
Shortly after launching my original web site, tankbooks.com, I received an email from Chris Bynum, Quentin's nephew. Chris inherited his uncle's dogtags and grew up with Quentin as his hero. I emailed Chris back and asked if any of Quentin's siblings were still alive. As a result, I went to Springfield, Missouri, and interviewed James Bynum, who was about five years younger than Quentin.
When I was a kid I wanted to grow up to be a detective, and when I did grow up and started working for a newspaper, I wanted to be an investigative reporter. Neither of those things happened, but I seem to have always had that "follow the evidence, connect the dots" instinct, not that I  was very good at connecting the dots in game books when I was a kid.
Which brings me back to Quentin Bynum, and an image I'll never get out of my head but that I didn't include in the book because I never was able to corroborate it. If a movie is ever made based on "The Armored Fist," I'll suggest basing a scene on this particular image; or if "The Armored Fist" were fiction, there's no doubt it would be the climax of a chapter. But the two people who could corroborate the image -- the two crew members, that is, who survived the incident in which Bynum was killed -- are deceased. Still, a couple of the facts support the possibility that the image might have been real.
One of the first stories James Bynum told me was about how his brother Quentin died when he was an infant. James said Quentin had diphtheria, although it occurred around the time of the great influenza pandemic of 1918 so it might have been the flu, but either way, the doctor pronounced Quentin dead. Quentin's mother, however, who had, according to James, "the mouth of a muleskinner," refused to let the doctor leave, so he suggested "warming the baby by the fire of the cookstove," and Quentin came back to life.
James surmised that during Quentin's brief brush with death as an infant, he may have suffered from a lack of oxygen to the brain, resulting in a diminished mental capacity. James' evidence of this was that Quentin grew up loving to do chores on the farm and eventually dropped out of school, whereas his older brothers, and James too, all favored intellectual pursuits.
Because he enjoyed farm work so much, Quentin became especially strong. James described how one winter when Quentin was walking home from school with James and one of his sisters, both of the younger children were crying from the cold, and Quentin picked them both up and carried them the rest of the way home. Another time Quentin challenged his older brother Hugh to a contest to see which one could pull a sprayer -- a feat best managed by a team of Clydesdales -- the farthest. Quentin took one side and Hugh the other. James didn't remember who won, but it illustrated the extent to which Quentin's strength had developed.
My research, such as it is, is not linear. I interviewed James Bynum in 1997. I interviewed Dess Tibbitts, who, like Quentin Bynum, was a tank driver in A Company, in 1995. I interviewed Bob "Big Andy" Anderson in 1993. (Bynum was killed on Jan. 14, 1945, in the Battle of the Bulge, along with two members of his five-man crew, Lt. Wallace Lippincott Jr. and Frank Shagonabe.)

"Your brother was killed in action. Do you need to go home?'
'I don't have any money, Sir.'


'We'll take care of that.'
We were trying to comfort our mother, and ignoring our father. He'd been an old cavalryman, himself. He took me back to catch the train and we were standing on the platform. We could hear the train way down in the distance, so I knew it was time to say goodbye.
I said, 'Dad, take care of Mom, she's taking this very hard. And it's going to be rough on her.' And I looked over at him. And my father never cried. He never patted us. Now, me, I'm a crier. And I'm a hugger. I get that from my mom. And I looked over at him and I thought to myself, 'My G-d, how stupid can you be? Quentin was his son and he's hurting.' And I opened my arms and he walked into them, and we stood there and cried. That's the only time I ever saw my father cry.'"

And then there's that image I was never able to verify, and can't recall who told it to me, but I know it was related by one of the veterans. As with so many things that occurred in the history of the 712th Tank Battalion, or any unit for that matter, eyewitness accounts differ, sometimes vividly, and secondhand accounts are sometimes distorted.
But when James Bynum described his brother's strength, I recalled hearing one account in which, after abandoning the tank, a round came in and wounded both Lieutenant Lippincott and Frank Shagonabe. Whether Bynum was wounded as well I couldn't say, but whoever told me the story said that Bynum picked one of the wounded men up with each arm and was carrying them when another round came in and killed them all.

Lieutenant Lippincott's canteen finds its way back to his family, 65 years later 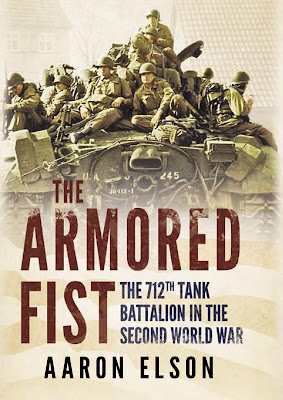 The Armored Fist at Amazon.com

Posted by Aaron Elson at 2:54 PM No comments:

Today I'm going to don my chapeau as an oral historian, and post a the audio from a sampler CD containing tracks from several of my oral history audiobooks. The audiobooks are available in my eBay store﻿. You can also order audiobooks by calling the oral history hotline at (888) 711-TANK (8265).
Click on the links below to listen to the sampler in mp3 form.
Track 1 Introduction (Aaron Elson)
Track 2 Karnig Thomasian, POW of the Japanese, from "For You the War Is Over"
Track 3 Sam Cropanese, 712th Tank Battalion, from "The Tanker Tapes"
Track 4  Ed Boccafogli, 82nd Airborne Division, from "The D-Day Tapes"
Track 5 Vern Schmidt, 90th Infantry Division, from "Kill or Be Killed"
Track 6 Bob Rossi, 712th Tank Battalion, from "Once Upon a Tank in the Bulge"
Track 7 Bob Cash, 492nd Bomb Group, ex-POW, from "March Madness"
Track 8 Russell Loop, 712th Tank Battalion, from "More Tanker Tapes"
Track 9 Jack Sheppard, from "Reflections of a Tank Company Commander"
Track 10 George Collar, 445th Bomb Group, from "The Kassel Cassettes"
Track 11 Jerome Auman, from "Four Marines"
(c) copyright 2013 Aaron Elson 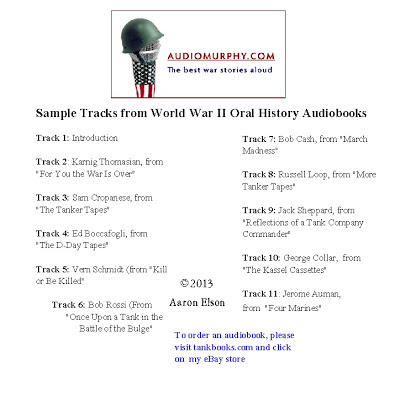