Coming Soon: Tanks for the Memories 2, The Hospitality Room

It's been a long time between posts. I've been working on a new book, "Tanks for the Memories 2: The Hospitality Room." This is a collection of stories, interview and conversation excerpts from the many reunions of the 712th Tank Battalion that I went to in the 1990s, until they stopped having them because the last few veterans were too frail to make the trip. It didn't help that two of the four who were at the final reunion were treated so badly in the airport where they had to make a change on a flight from Boston to Florida that they decided it would be their last reunion. I forget what year it was, but in the early 2000s, I think.
Please keep an eye on social media (Facebook, Twitter, LinkedIn, my email newsletter, which gets posted on Facebook anyway) for further progress on the book. In the meantime, since I had such a wealth of material from which to draw, I'll be posting some "outtakes" from the many transcripts which have been hiding on my computer's hard drive for nearly two decades.
The photo above is of Art Horn, who became a mechanic in D Company of the 712th Tank Battalion. Art sent the picture to his girlfriend Margaret, whom he would later marry, in Chicago, and it wound up in a newspaper, I'm not sure which one.
While he was training in the horse cavalry, Art had a bit of a mishap on a horse. It was not the horse pictured above. During an exercise in which the trooper had to ride in a figure 8, shooting at targets at various points, Horn fell off the horse, struck his elbow on the ground, the pistol fired and the bullet struck the horse in the chin. The horse survived. I had heard about this from a couple of other former cavalrymen in the 712th, so I asked Art about it. This is what he said:

"That was after six to eight months of training, the company commander gave an order to the stable sergeant to take certain horses away, we were gonna be firing on the range, and he says to put those in the corral and don’t let them on the line so that anybody could take one. But I think I got one. And I waited my turn. The biggest problem was that the rest of the horses were in the distance, they would stay there and each one of us would make these figure eights, run the figure eight, and this horse that I had, as long as I fired away from him, when I went around the other way to fire crossover is when it got too close to his ear and he bucked and he threw me on the ground. And when I landed on my back, my elbow hit the ground and I still had my hand on the pistol. The bullet went straight up. Because they always said when you’re on the firing range, when you’re not firing, always hold it straight up, because if I’d have held it off to the side I might have hit one of the men that were standing around.
"So I did that. The horse stopped, and I got up and I looked and I noticed that there was a little blood coming down from his throat. And I looked at it, and I said, oh, the bullet hit the horse. But I also noticed on the halter on the horse there was a double leather thong that was underneath there. The bullet went through that, and then I found out later that the bullet only entered into the horse’s mouth, and when they got to the vet they were able to take it out and it healed up, and he was back in the saddle again."

Read the Original Tanks for the Memories  (free online at tankbooks.com)
Order the expanded 2nd Edition (almost twice as full of great stories) 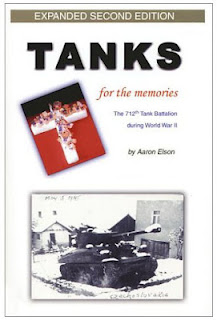