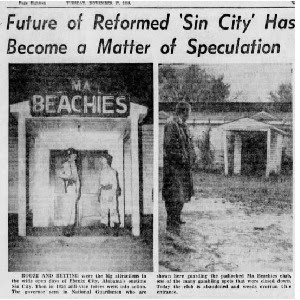 Phenix City, Alabama was off limits, but that didn't stop tankers and paratroopers from going there. Tank driver George Bussell and tank commander Reuben Goldstein took part in a brawl at Ma Beachie's, an iconic establishment in a city described in a government report as the "wickedest city" in America. But first, a couple of anecdotes about a friendly fire incident and a mad gunner, both of which will be elaborated on further in future episodes of War As My Father's Tank Battalion Knew It.

Following is an article that appeared in the Shelbyville, Tennessee, Times Gazette in 2005, which gives some background on what Phenix City was like in the 1940s:


Death, prostitution and the paper boy