The saddest story I ever heard

Way back in 1999, before they invented bucket lists, if I had had a bucket list at the time it would have included getting lost in every state in America. I got lost in Illinois once, looking for Russell Loop, a veteran of my father's tank battalion. I drove past miles and miles of farmland, corn fields if I remember correctly, and his instructions were to look for a store in the center of town -- the town being Indianola, Illinois, follow a state road to the end, then turn right. Only I followed the wrong state road and it didn't end, and it was dusk, and my car was low on gas. After several miles the road ended and I turned right and saw a house, so I knocked on the door and a young woman holding a baby answered and she never heard of Russell Loop and I wasn't in Indianola anymore. So I doubled back to the store and took the other road and eventually found his house. I got lost in a parking lot in Fort Mitchell, Kentucky once. In my defense it was the parking lot of the Drawbridge Inn, which is like a corn maze without the corn. But O.J. Brock, one of the youngest of the battalion's veterans, in his early seventies at the time, had brought his Harley-Davidson to the reunion on a trailer and wanted to put it in a storage facility, and asked if he could follow me out of the parking lot. That was pretty embarrassing, but I eventually found the exit.
Florida, well, I could have crossed that one off a few times. I almost never met Paul Swofford, one of a number of veterans of the ill-fated Kassel Mission of Sept. 27, 1944, on my interviewing trip in 1999. He lived in Lakeland. There was a brand new road called the Polk Expressway and I got off at the wrong exit and drove around an airfield called Drane Field at least two times. GPS was a relatively new phenomenon and the closest thing to a cell phone was Maxwell Smart's shoe. Again it was getting dark and I finally pulled into a strip mall, found a phone booth and called Paul. Turns out the entrance to the development he lived in was an easily missed road off the new expressway's service road, but I finally did find it, and we talked for more than two hours.

That's Paul Swofford with the long face in the picture while three members of his crew are celebrating after a mission was scrubbed. The way he explained it, that would have brought him one more mission closer to completing the 35-mission requirement. Plus the responsibility for his crew as the pilot weighed heavily upon him.
Thanks to the efforts of veterans like George Collar and his son Doug, and Bill Dewey and his daughter Linda, and Walter Hassenpflug in Germany and a young Belgian, Luc Dewez, the Kassel Mission is slowly taking its place in the annals of history, where it previously was relegated to little more than a footnote: biggest one-day loss for a single bomb group in 8th Air Force history. Thirty-five B-24 Liberators of the 445th Bomb Group flew off course and lost their fighter protection that day, and were ambushed by 100 to 150 German fighter planes. In a battle that lasted by most accounts about six minutes, 25 bombers and many German fighters were shot out of the sky before the American P-51s and P-47s, responding to a flurry of Mayday calls, arrived and the German planes skedaddled.
All of the surviving bombers were damaged, some of them heavily. Three crash-landed in Allied-occupied territory. Two reached an emergency landing field in Manston, England. One was forced to overshoot the 445th's base at Tibenham, England, because there was construction equipment on the runway, and crash-landed five miles away. Four planes made it back to Tibenham.
Paul Swofford was the pilot of one of those four. Shells from a Fokke-Wulf 190 had shattered his windshield and both Paul and his co-pilot had shards of glass in their face. One of the Liberator's four engines was shot out. The hydraulics didn't work. As he approached the base, Paul had his engineer fire flares to signal there was a wounded man on board. In response, the personnel on the ground fired red flares, denying him permission to land, because he was approaching a taxiway rather than the runway. The engineer would have to hand-crank the landing gear up and Paul would have to climb to 500 feet, and he didn't think that was  possible. But the engineer succeeded, Paul circled the airport and landed successfully.
Paul kept his anger at the ground personnel inside all those years -- 45 of them -- and he remained angry until the day he died, but talking about it in an interview for the first time kind of opened up the floodgates. He bought a new computer and got onto the Internet and began downloading pictures of all sorts of airplanes that he put in a scrapbook. He spoke to Bill Dewey, who piloted one of the planes that reached Manston, and he even came to an 8th Air Force reunion at which the 445th had a hospitality room.
In his house in Florida, Paul had a small room set aside for his memorabilia from 24 years in the Air Force, from which he retired as a lieutenant colonel in 1966. He had an embroidered B-24 that he picked up somewhere mounted on a wall. He had certificates for flying so many thousand hours in different aircraft. He had served in the Strategic Air Command.
In the memorabilia room, I noticed a figure, a doll really, of the ventroliquist's puppet Mortimer Snerd holding a baseball glove. I asked Paul about it.
That was his son's baseball glove, he said, and Mortimer Snerd, who along with Charlie McCarthy was part of the ventriloquist Edgar Bergen's act, was his son's favorite character. His son was killed in an automobile accident when he was 19. Paul and Sybil didn't have any other children.
I think that's what created a bond between Paul and me, unlike my relationships with other veterans I've interviewed, although I often visited Dorothy Cooney, the girlfriend of my father's buddy who was killed and who never married.
Over the next few years I visited Paul on a number of occasions.He and Sybil, Baptists, were very religious. It was the embrace of religion that kept their marriage from falling apart after their son was killed, Paul said. Sybil, god bless her, eventually stopped trying to help me find Jesus, but I don't think she ever gave up hope.
I posted several of my interviews with veterans of the Kassel Mission, including Paul, on my web site. One day Paul and Sybil were in church and his pastor read aloud a portion of Paul's account of the battle that he downloaded. He didn't say whose account it was. When he reached the end, he asked Paul to stand up.
A Congressman was in church that day. A few weeks later, in a ceremony at the church, Paul was awarded the Silver Star. 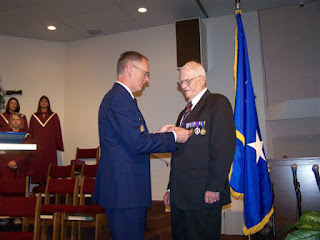 These are the three tracks from the interview in which Paul talks about his son:


(Paul Swofford passed away on April 20, 2016, eight days shy of his 95th birthday. Sybil Swofford lives in an assisted living facility in Florida.)
Posted by Aaron Elson at 10:10 PM