Lou Putnoky called me on Saturday afternoon. Lou is 92 years old, maybe 91. A Coast Guard veteran of World War II, he was a radio operator on the USS Bayfield, the flagship of the Utah Beach invasion fleet. He is not in the best of health, having had at least two serious heart attacks, and is living with his daughter since his wife passed away a few years ago.
Lou gets sentimental, or nostalgic, and calls me from time to time. We have this routine, somewhere between Abbott and Costello and Hillary and Donald. He thanks me profusely for all I've done to preserve veterans' stories, and I remind him that all I've done is flip the switch on a tape recorder, and there would be nothing to preserve if it weren't for veterans like himself. Nothing will ever convince him that I'm not one of the greatest contributors to preserving the history of World War II, and nothing will ever convince me that he isn't one of the greatest storytellers to come out of the war, although his voice these days is not as strong and compelling as it used to be.
In 1994 I wrote to Stephen Ambrose and asked if he could provide me with the names of any D-Day veterans living in New Jersey that I could interview for a special section the newspaper I worked for was planning to do in conjunction with the 50th anniversary. He sent me a list, but Lou's name wasn't on it.  One of the men on the list, Dr. Vincent del Guidice, who had been a  pharmacist's mate on the USS Bayfield, suggested that if I wanted stories I should call his old shipmate Lou.
Which I did. Lou's wife, Olga, answered the phone and I told her I'd like to interview her husband about his experiences on D-Day. Before she called Lou to the phone, she said I should make sure to ask him about one particular story, because it was one he almost never talked about.
That story is included in my book "A Mile in Their Shoes" and in my audiobook "The D-Day Tapes,"  but here it is in Lou's own words, if you don't mind listening to an audio file of it. This is an audiobook blog, after all.


That was recorded in 1994. Lou went on to tell many other stories in that three-hour interview and we've kept in touch over the years. I was able to bring him to an event at the Yogi Berra Museum one day so he could get his picture taken with Yogi, with whom he served on the Bayfield. In that very first interview he made excuses for Berra never attending a Bayfield reunion, Yogi was busy with other obligations and all that. At the time I had no idea how much it would have meant to the veterans if Yogi had made an appearance at a reunion.
Usually Lou calls on days of significance to veterans, like Memorial Day or Veterans Day, or the anniversary of D-Day, when he gets especially sentimental. So I wasn't expecting him to call this weekend, but I was glad I was at home. Sometimes he leaves rambling, sentimental messages on my answering machine.
His voice was weak, and he said there was a second part to the story about the "man overboard," which was the title I gave to his interview in "A Mile in Their Shoes." Then he told me the story. When he finished, I put my phone on speaker, flicked the "on" switch of my digital voice recorder, and made him tell me the story again.
Following is a transcript. There were a couple of places where I couldn't make out a word, so bear with me if something doesn't quite make sense. 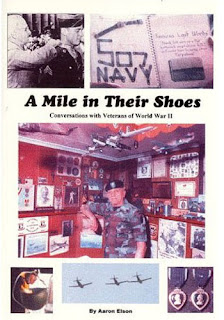 A Mile in Their Shoes at Amazon.com 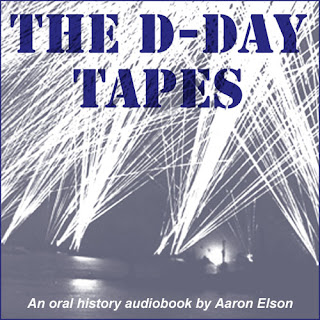 The D-Day Tapes on eBay