A juxtaposition of events 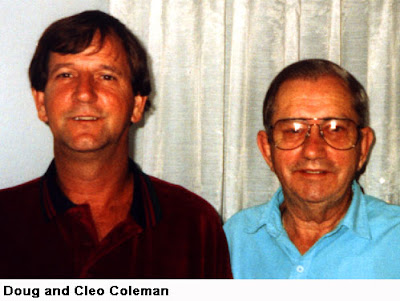 A few weeks ago through Facebook Cleo Coleman's granddaughter asked if I had the interview I did with Cleo and her uncle Doug on CD, as she would love to hear Cleo's voice again (he passed away in 2006). I searched my computer, and even picked it up, turned it over and shook it a few times, but no audio fell out. Since I did the interview in 1996 and used a transcript for my third book, "A Mile in Their Shoes," I figured the audio is on the hard drive that I rescued from my old computer. Unfortunately, that hard drive is more corrupted than Whitey Bulger and his FBI handlers put together.
Not one to be easily deterred, I promised Cleo's granddaughter I would re-digitize the original tape, which usually means searching through about 30 cases of 15 cassettes and cursing my lack of organizational ability, except I knew Cleo was in B Company and because I only interviewed a handful of B Company veterans from the 712th, I'd put them all in one case, unlike my A and C Company interviews, which are scattered throughout the three bookshelves which call themselves my archive.
Around the same time, as I attempt to increase my presence in the Amazon on-demand and Kindle catalogues, I began transcribing one of the four interviews I did with Marine veterans of World War II. Two of the four were already transcribed, and I figured if I transcribed the other two and carefully edited all four, I could put them together in a book and call it "Semper Four."
And then an odd thing happened. In listening to my interview with Cleo -- in addition to the interview with Cleo and his son I also re-digitized a kind of informal 1994 interview I did with Cleo poolside at the Drawbridge Estates Inn in Fort Mitchell, Ky. -- I heard a passage that was, on an emotional level, eerily similar to an incident described by Bob Hamant that took place on the other side of the world, and which, I daresay, was repeated countless times in countless variations throughout the Second World War.
Cleo was describing the death of Stanley Muhich, a sergeant in his platoon. Muhich had a bit of a short temper, and this was toward the end of the war, during the battle for Mainz, so it was probably in March of 1945. A round jammed in the barrel of the tank's 75-millimeter cannon, and the only way to free it was to stand in front of the tank and push a long wooden pole with a bell shaped thing called a rammer staff down the barrel. Instead of maneuvering the tank into a relatively safe area, like behind a building or beside a copse of woods, Sergeant Muhich jumped out of the tank, began the process of freeing the round, and was killed by a sniper.
Sometime that evening, an infantryman marched two young Germans, one of whom may have been the sniper, past the tank. A fellow tanker who'd been a buddy of Muhich's since their days in the horse cavalry in 1941, through three years of training and almost a year of combat, took the two prisoners and shot them both. Coleman recalled that after doing this, the tanker was visibly shaken and his face was white as a sheet.
Cleo named the tanker who did this but I won't disclose it here, as it's not something the person's descendants should maybe ought to find if they google his name.
At about the same time as I was digitizing the Coleman interviews, I was transcribing the audio of my interview with Bob Hamant, conducted in 2000 in Cincinnati. Bob was a Marine on the island of Tinian, and I made that interview into a separate two-CD audiobook simply titled "A Marine on Tinian," and then included it in the four-interview audiobook called "Four Marines," the name of which I'm also going to change to "Semper Four."
Early in the interview, Bob described witnessing the famous "Marianas Turkey Shoot" from on board ship off Saipan. He witnessed an incident close to his ship in which a Japanese plane shot down an American P-38, and the pilot bailed out. As he helplessly headed toward the sea, the Japanese pilot came down to his level and machine gunned him to death in his parachute. Then "about 15" American fighter planes converged on the one Japanese fighter, shot it down, and multiple times raked the sea with their machine guns.
One of these events occurred in the European Theater of Operations, one in the Pacific, and yet it seemed as if there was a purpose in my processing them at about the same time, as if it were a hint that I should make a blog entry out of them. And so I did!
Posted by Aaron Elson at 8:53 AM