An excerpt from "The Armored Fist"

My new book, "The Armored Fist," is now available. It is the story of the 712th Tank Battalion, with which my father served in World War II. Following are the preface and first chapter. 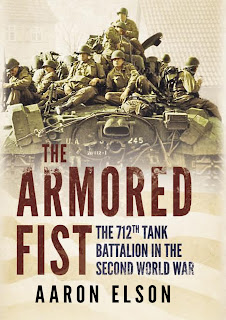 You can also order a signed copy from Amazon by going to the listings for new and used copies, and looking for the listing that says directly from me; in that case Amazon processes the payment, sends me the order, and I ship the book. Go figure!
Connecticut residents please add 6 percent sales tax. Be sure to include your address! And let me know to whom you would like the copy inscribed if it's to be a gift. A slight discount is available if you'd like to order more than one copy.
To speed up your order, you can call 888-711-TANK  (8265) or send me an email and I'll get your copy in the mail right away.
The book can also be pre-ordered from amazon.com or directly from the publisher. For orders in the U.K., I'd suggest ordering directly from London-based Fonthill Media; if you'd like a signed copy, it would require international shipping, which would add several dollars to the order.
- - -
﻿
Please subscribe to the Oral History Audiobooks email newsletter to keep up with the latest developments and specials.