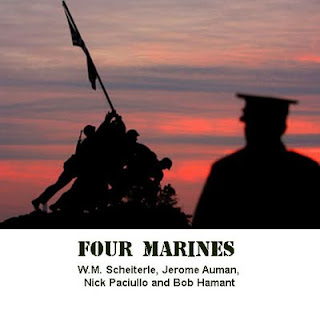 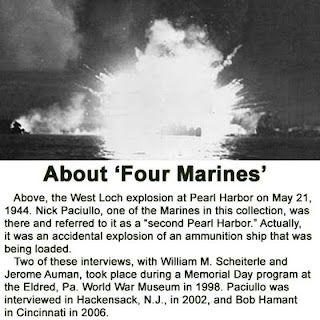 It began with a simple, straightforward question, one I've asked in a hundred different interviews.
"What was your rank?"
The answer started out fairly simple. "Private ..."  Then it escalated.
"...Pfc. ... Corporal ... Private ... Pfc. ... Corporal!"
Followed by a burst of laughter.
What ensued was a poignant story, involving a small group of rowdy Marines having some fun in San Diego, a Congressional Medal of Honor, Iwo Jima and Kwajalein. The speaker was Nick Paciullo, whom I interviewed in 2002. I didn't realize just how poignant the story was until I edited the interview for my latest oral history audiobook, "Four Marines." It lacks the details an author might add: the weather, the sounds, the scenery, the dialogue, but to me the story is just like out of a movie.
Nick Paciullo (real audio)
On Memorial Day in 1998, I participated in a program at a new World War II museum in Eldred, Pa., and interviewed several veterans who attended. Two of those veterans, William M. Scheiterle and Jerome Auman, are included in "Four Marines."
Paciullo, a veteran of Iwo Jima who also fought in Saipan and the Marianas and was wounded three times, was a neighbor of mine in New Jersey. I interviewed him shortly before the first anniversary of the Sept. 11 attack on the World Trade Center, an event that triggered serious episodes of post traumatic stress in Paciullo.
In 2005, Diann Hamant of Cincinnati contacted me through my web site, tankbooks.com, and asked how she could find someone to do an oral history interview with her father. A few months later I attended a reunion of the 712th Tank Battalion in Cincinnati, so I interviewed him myself. Bob Hamant spent a year on the island of Tinian, and witnessed the Enola Gay being prepared for its mission to drop the atomic bomb on Hiroshima.
For more information about World War II Oral History Audiobooks, please visit www.audiomurphy.com
Posted by Aaron Elson at 6:05 PM