Oberwampach
In 1936, Arnold Brown left his home in Cronos, Ky., with 50 cents in his pocket and an eighth-grade education, hopped a freight train, and enlisted in the Army. He was 18 years old. When I interviewed him in 1997, he was 80 years old, a retired colonel, and living in Owensboro, Ky.
During the battle of the Bulge, he was a captain in command of Company C of the 358 Regiment of the 90th Infantry Division. This is his story of the battle of Oberwampach, as told to Aaron Elson. 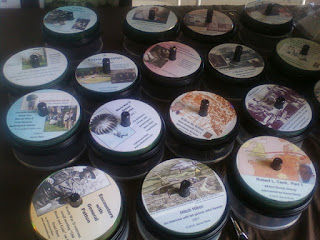 See how you can help Oral History Audiobooks grow﻿
Posted by Aaron Elson at 4:34 PM 2 comments:

You Could Die Laughing 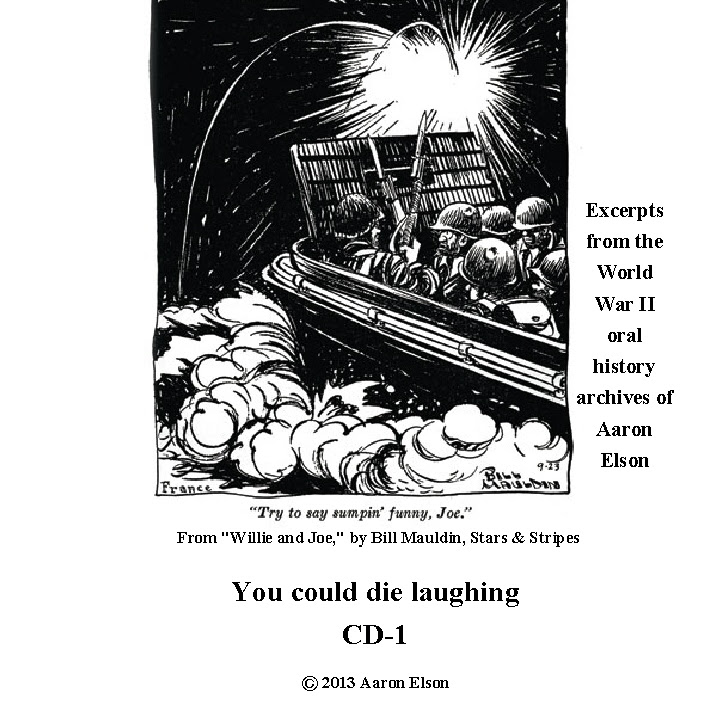 Lately I've been putting together themed compilations of stories taken from my personal archive of some 600 hours of interviews with World War II veterans.
One recurring theme in the interviews is the importance of a sense of humor to the combat soldier. Some things might not seem funny in retrospect, and others withstand the test of time, like the new lieutenant who instructs his company, "Hands on Place, Hips!"
Bill Scheiterle was a young lieutenant in the assault wave on the island of Peleliu. "I don't ever have to worry about going to Hell because I've been there," he said when I interviewed him at the Eldred World War II Museum one Memorial Day. Then he told me an amusing story about one of the most horrific battles of World War II. He told his company that he had a bottle of brandy in his pack and when they got ashore he would break it open and they would all have a drink. However, a shell exploded nearby and as he lay face down on the beach, he heard one of his men shout "The lieutenant's been hit." Then he heard another voice shout "The heck with the lieutenant, get the bottle!"
(Tragically, the bottle of brandy, along with Scheiterle's pack, was demolished, but the lieutenant was patched up on a ship and returned to action the next day.)
Frank Bertram was a 19-year-old navigator when his B-24 was shot down during the ill-fated Kassel Mission bombing raid of Sept. 27, 1944. The Kassel Mission generated one of the great stories of closure to come out of World War II: In 1986 a monument was dedicated in Friedlos, Germany, with the names of all of the American and all of the German fliers (and a handful of civilians) who died in one of the most spectacular aerial battles of World War II. Some 600 people, including American and German survivors of the battle, attended the dedication. Afterward, Bertram was invited to a reunion of veterans of one of the German fighter squadrons that attacked the 445th Bomb Group that fateful day.
The German veterans were boisterous, drank a lot of beer and smoked liked chimneys, and for a gavel, their president used the joystick of a Fokke-Wulf 190. Toward the end of the evening, Bertram asked to see the joystick that was used as a gavel. He turned it over, looked at its underside, and said "Hah, it says "Made in Japan."
After a moment of stunned silence came the remark "Nein! Nein! Deutschland!" before his hosts realized he was making a joke, and burst out in laughter.
These and many other stories, all of which are historical and some of which are hysterical, are included on the new audio double-CD, which is available in my eBay store, along with the many other audiobooks drawn from my oral history interviews.
Mention the blog when you order a copy, and I'll include my other new individual themed CD, "Uphill Both Ways," with stories about the Great Depression. I'll have more about that in my next entry.
Here are some excerpts from "You Could Die Laughing."


mp3 John Zimmer, a veteran of the 712th Tank Battalion, describes a visit to an elementary school.


mp3 Reuben Goldstein, a tank commander in the 712th, has a book autographed by a general. (From "Once Upon a Tank in the Battle of the Bulge")


mp3 Bob Hamant, a Marine who spent a year on the island of Tinian, describes an incident while unloading 90-millimeter shells from an ammunition ship. (From "Four Marines").


mp3 Frank Bertram, a navigator on a B-24 and former prisoner of war, tells of an invitation to a reunion of German fighter pilots. (From "The Kassel Cassettes," which is currently out of circulation while it undergoes some changes).


mp3 Bob Hamant recalls some playful goats on the island of Tinian that liked to pee on sleeping Marines.


NOTE: I produce these audio CDs from my personal oral history archives in small batches with paper labels. Because of this, it's important to keep them from excessive cold or heat, which could cause buckling of the label. It's recommended, if possible, to make a backup copy of each CD. Occasionally the CDs will skip in a car CD player while they play well in computers and regular CD players. I'm working on the problem, but if it should arise will make a full refund or send replacement CDs. Thank you, Aaron Elson

New in my eBay store:

You Could Die Laughing

"Tales of Love, Food, Booze ..." was conceived in 2008, when Bear Stearns went under and the financial markets collapsed. Then-President George W. Bush issued the first $600 billion bailout of the financial industry. At the time, I was in the early stages of two years and five months of unemployment and figured I could use a bit of a bailout myself. Then it occurred to me that over the years I had interviewed numerous ex-prisoners of war, B-17 and B-24 crew members whose bombers were shot down over Germany; and paratroopers who were captured in combat. All of these men had, in effect, bailed out of airplanes. And so I decided to create my own bailout package. 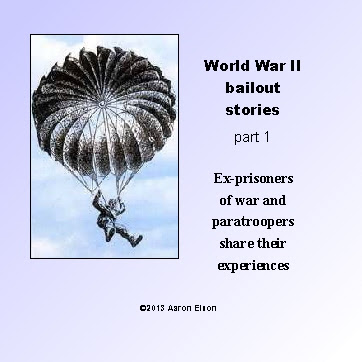 That was in September of 2008. A few months later, I was digitizing my interview with Charles Feiler, who had been a dentist in the 101st Airborne Division. "Doc" Feiler, who served as a medic during the siege of Bastogne, had recently returned from the hospital and was medicated, which put him in a very good mood. His wife, Lillian, sat in on the interview, as did my neighbor Maurice Tydor, a 101st Airborne veteran who introduced me to the Feilers. Lillian Feiler was British, and had met her "Yank" in London between D-Day and Operation Market Garden. As I was listening to the story of how they met -- she described herself as a "kissless bride" because a day after they were married, Doc Feiler was restricted to base and then sent to Holland during Operation Market Garden, and Lillian didn't hear from her new husband for almost two weeks -- I realized it was Valentine's Day, and I thought I might make a themed audio CD with similar stories. Thus was born the CD "Tales of Love and War." 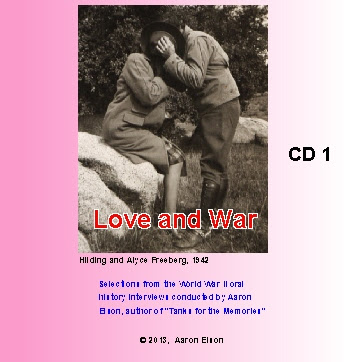 Next I thought of all the colorful dining and drinking stories I'd recorded over the years. Before you know it I had a CD for each, although the drinking CD has been expanded to two CDs, both of them 100 proof. 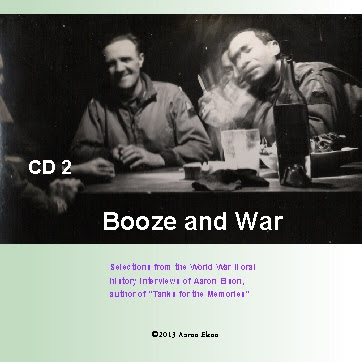 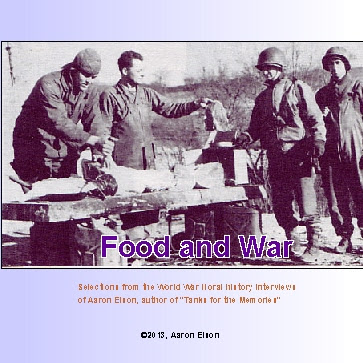 All that remained was a collection of stories about General Patton. Some of the veterans were yelled by Patton or witnessed someone else being chewed out by him. Others heard him give a speech or a pep talk and quoted it word for word nearly fifty years later. 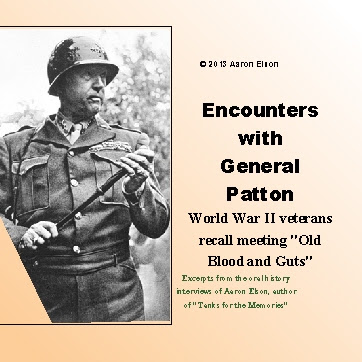 
And there you have it: Tales of Love, Food, Booze, Jumping Out of Airplanes, Meeting General Patton and winning World War II, eight hours on eight themed CDs excerpted from my hundreds of hours of interviews with people of the World War II era.

Here are some audio excerpts, in mp3 form:

From "Love and War," Art and Ella Hary. Art was a veteran of the 712th Tank Battalion. He and his wife grew up in Hartford, Conn.


Art and Ella Hary
From "Food and War," Bob Hamant. Bob was a Marine on the island of Tinian. His interview is included in "Four Marines."
Bob Hamant
From "Booze and War," Joe Fetsch. Joe was a gasoline truck driver in Service Company of the 712th Tank Battalion. This story was recorded in the Hospitality Suite at a reunion of the battalion.
Joe Fetsch
﻿
﻿
From "Jumping Out of Airplanes," Hal Mapes. Hal was a waist gunner on a B-17 that was involved in a midair collision near Chartres, France. He was one of only two survivors of the crash.


Hal Mapes
From "Encounters With General Patton," Russell Loop. Loop was a gunner in the 712th Tank Battalion.
Russell Loop
Thanks for listening! The new and expanded "Tales of Love, Food, Booze, Jumping Out of Airplanes, Meeting General Patton and Winning World War II" is available in my eBay store.

Coming soon: "Stories of the unusual and bizarre, faith in a foxhole, and humor in uniform"

And be sure to watch for the April release of my new book "The Armoured Fist," published by the new and exciting British imprint Fonthill Media. Email me at aelson.chichipress@att.net if you'd like information about ordering advance copies. Thanks, Aaron Elson.

P.S.: Here are some more clips from "Food and War."


Here are some clips from the audio CD "Food and War," which is included in the audiobook "Tales of Love, Food, Booze, Jumping Out of Airplanes, Meeting General Patton and Winning World War II."