No Way to Treat a Widow Lady 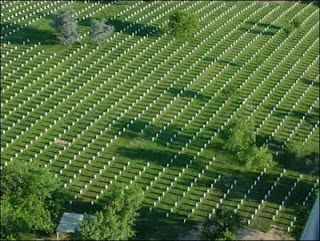 Late in June, Sarah Schaen Naugher, the widow of Lt. Jim Schaen, traveled from her home in Pontatoc, Mississippi, to visit the grave of her husband. Sarah is 87 years old. Lt. Schaen was killed on the ill-fated Kassel Mission bombing raid of Sept. 27, 1944, and is buried at Arlington Cemetery.

Despite trying for two days, Sarah was unable to reach her husband's grave. Upon returning to Pontatoc, she described her experiences in a letter that she sent to President Obama. If you are as outraged as I am by this, I hope you will forward her letter to anyone you think would be interested in reading it. This is what she wrote to the president:

To Anyone Who Cares:

"For quite a number of years, I have been saving in anticipation of making one last trip to Arlington National Cemetery to visit my dear husband's grave for one last time. As I will soon be 88 years old, I must face that reality. A nearby Travel Service announced that they would be going to Washington, D.C., for six days on June 20, 2010. I immediately saw my chance to get back to visit Jim's grave for my last time.

"Our tour group planned to go to Arlington, as a group, on Wednesday, June 23rd, where we were told that we would take a Tourmobile and could get off at any point and catch a later one when it stopped. Wonderful. I could get off near Jim's grave and stay with him as long as I desired.

"It didn't happen. The Tourmobile driver said that they didn't go to the Section 8 part of the cemetery. After taking two tours, I got off and returned to the Visitors Center. I went to the information booth and talked with the person in charge. She told me that I would have to call a taxi and by using my Pass to Arlington, I could give the driver the section number and the grave site and he would take me to it. She told me the telephone number to call. As it was too late to call on Wednesday, I revised my schedule and decided to come back to Arlington on Thursday.

"On Thursday, my bus driver brought me back to the main entrance to Arlington and put me in a taxi to take me to the Visitors Center. As this driver didn't know anything about Arlington, I had him to let me out at the Visitors Center Information Booth where I had been the day before. I had them check the telephone number and they assured me that it was correct and that this was what I must do to go to my husband's grave.

"I told the telephone operator who answered that I needed someone who spoke English; someone who was familiar with Arlington Cemetery; and someone who could take me to the Comfort Inn in Fairfax, Va., when I was ready to go. She told me that she was sending an Arlington yellow cab and that it would be there in 15 or 20 minutes. As I was told to do, I waited at the main entrance for 35 minutes. No taxi. I went to the person who was directing traffic and told her what I was waiting on and that at my advanced age, I couldn't stand in the heat and wait longer. She said she would check with the taxis that were in line, which she did. None spoke English and were not waiting for me. Soon a red-top taxi drove up and she asked him and he said he was to pick up Naugher and I knew that it was for me. I gave him my Pass and told him to put it in front of him on the dash, which he did.

"He could barely speak English but I could understand him. As he knew nothing about Arlington Cemetery, I directed him to turn left on Eisenhower, and then a right on Patton Drive, which he did. As there was no Section 8 sign (I had given him a map of the cemetery and showed him Section 8), I told him to stop. As many new tombstones had been added since my last visit, I couldn't climb up the steep hill to look for Jim's grave, and the taxi driver was no help at all.

"After looking as much as I was able, I told him the address of the Comfort Inn in Fairfax, Va., and told him to take me there. I had spent two days at the cemetery and four days on the trip and had not yet visited my husband's grave.

"James Schaen of Des Moines, Iowa, was drafted in the first draft in the Spring of 1941. He did not volunteer but went willingly when called. He became an Air Force pilot on a B-24. He left me in Topeka, KS, on June 6, 1944, to fly across the Atlantic Ocean with his crew. He was stationed in Tibenham in England and was on his 15th mission when he was shot down by German fighters who attacked the 445th Bomb Group and shot down 25 B-24s within five minutes in the deadliest mission of the Eighth Air Force of WWII. I got the message that he was missing on October 14, 1944, but was not told that he had been killed when he was shot down until Jan. 25, 1945. During the winter of 1945 I was pregnant with our daughter, and did not know whether I was a wife3 or a widow. Our daughter, Jima Carter Schaen, was born in February, 1945.

"As his plane was shot down in East Germany near Gerstungen, Jim's remains and those of six other airmen were buried by the German citizens in the city cemetery. They were not exhumed until 1950 and Jim was buried in Arlington National Cemetery on January 31, 1951.

"I have been able to return to his gravesite five times over the years but failed on this last attempt. I called the Arlington National Cemetery telephone and asked if there was anything that I could have done that I didn't do and was told that I did everything right. I have grieved for my precious husband for 66 years and yet I couldn't get to his grave to tell him goodbye. He gave his life for America -- he never saw his daughter who just had her 65th birthday; nor has he seen his three grandchildren; nor has he seen his six great grandchildren.

"Is this the way a loving widow is to be treated? One who is trying to visit her husband's grave in the National Cemetery. Is this the appreciation America shows to those who have given their life for their country?

"With all my heart, Sarah Carter Schaen Naughter."
Posted by Aaron Elson at 12:54 PM 3 comments: